- September 06, 2017
Several months ago I started encountering intermittent driver issues during imaging newer Dell systems with Windows 7. Dell has several excellent articles on how to handle Windows 7 imaging on newer systems with NVMe, but none of these articles really hit the nail on the head for my issue. I would get a batch of 50 systems where 45 would image perfectly and 5 would fail even after repeated attempts. I cracked open a working system and a failing system to find the same exact components (same hardware revs and all) in each one. Second thing on the checklist was to make sure every single setting in the BIOS was the exact same which it was.

After several months of battling model after model with limited success, a new contractor joined my organization and we both came to the conclusion after a few days that things were acting really weird. I then stumbled across an article for SCCM CB that seemed to describe a similar issue to what we were having.

While this didn't describe my issue (I'm on SCCM 2012 R2 still), the symptom was pretty close to what I was seeing. We gave "Workaround 1" from this article an attempt and knock on wood, it seems to have solved our issue. I'll give you instructions / screenshots for the Dell Optiplex 7050.

We have a step (highlighted yellow) in our TS for Apply 7050 Driver Package (we are using the Dell Enterprise CAB driver pack from http://en.community.dell.com/techcenter/enterprise-client/w/wiki/2065.dell-command-deploy-driver-packs-for-enterprise-client-os-deployment) that uses the traditional driver package step with a WMI Query for SELECT * FROM Win32_ComputerSystem WHERE Model LIKE "%Optiplex 7050%" that limits it to that specific model. Important notes - we check the boxes for Do unattended installation of unsigned drivers and Continue on error. 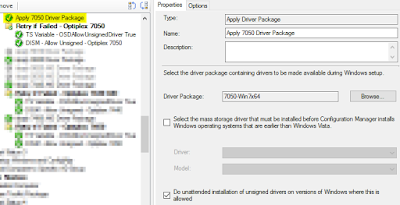 Immediately after this step, add in a new Group and call it Retry if Failed - Model Number. Check the box for Continue on error. Then add in two conditions:
1. WMI Query: SELECT * FROM Win32_ComputerSystem WHERE Model LIKE "%Optiplex 7050%"
2. Task Sequence Variable:
a.  Variable:  _SMSTSLastActionSucceeded
b.  Condition:  equals
c.  Value:  false

The second step in the Group will be a new Run Command Line step. Call it DISM - Allow Unsigned - Optiplex 7050 (or Don't Allow Unsigned) and then set the following Command Line:
DISM.exe /Image:%OSDTargetSystemDrive%\ /Add-Driver /Driver:"%_SMSTSPackageCacheLocationA01004E3%" /Recurse /forceunsigned /logpath:"%_SMSTSLogPath%\dism.log"
***Modify the package number listed to indicate your driver package for that specific model of computer***
1.  Check box for Continue on error
2.  Success Codes - Add codes 2 and 50
3.  Add Condition for Set Task Sequence Variable:
a.  Variable:  OSDAllowUnsignedDriver
b.  Condition:  equals
c.  Value:  true  (or false if you don't want to allow) 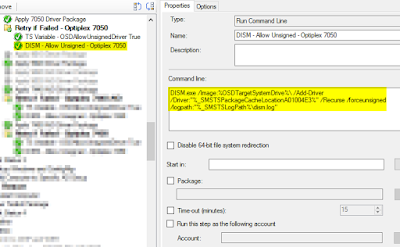 Popular posts from this blog

CMPivot to check Services and start them (with a little help)

Have you ever needed to get a really fast real-time look at if a service is running on a set of servers or workstations? Open CMPivot against a collection, type in your query, and send it. Seconds later you get real-time answers to your query for any online device. Queries for CMPivot run on 42 devices at once, until all devices you're querying have responded.  The last time my organization did server updates, I (and a trusty super awesome coworker) had to verify if a couple of SQL services were running on a small collection of servers. As we were manually checking these one by one, I came up with the idea that it would be incredibly helpful to use CMPivot.  The below query in CMPivot will return all devices where a SERVICE with the name containing SQL is NOT RUNNING and the service's start type is AUTO. In other words, if a service with SQL in the same is supposed to be automatically running and it's not, this query tells us. Service | where Name contains 'sql'
Read more

How do you use Parameters in MEMCM's (R.I.P. SCCM) Run Scripts? How do you use Parameters on the Run Scripts  feature? You get three guesses, but the first two don't count. That's right, you create a script with standard PowerShell Parameters and you build it out in MEMCM. In your MEMCM console, navigate to Software Library > Overview > Scripts. If you're not familiar with Run Scripts  in MEMCM, check out my previous Blog articles on it. Click on Create Script . In the Create Script Wizard  that pops up input a Script Name , pick between PowerShell or PowerShell in your Script Language , import or paste in your script with Parameters, and click on Next . My demo script for this article ( scroll alllll the way down, it's at the bottom ) is about an 8 out of 10 on the cool factor, and about a 3 out of 10 on the usefulness factor. Long story short, the script will make a computer talk. There are two Parameters that you can input, one for "what do y
Read more